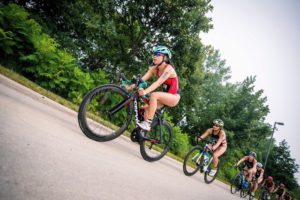 I still remember the day clearly: I was nine years old and had just finished my first triathlon, the Amy’s Amigos Be AMYazing! Reston Youth Triathlon. This was the first year that the race was held, and prior to competing, I barely even knew what a triathlon was. I was a year-round swimmer and occasionally went on bike rides with my dad, but swimming, biking, AND running all together seemed a bit crazy. Little did I know that the AMYazing triathlon would help me to discover my passion and enable me to compete in races across the country – meeting some of my best friends along the way.

For the next several years, I continued to compete in local Reston races, falling more and more in love with the sport each time. In May of 2016, when I was 13, I decided that I was ready to take my chances at a more competitive race in Richmond, VA. Unlike my previous races, this was a draft-legal event with competitors from all over the USA. I would soon realize that there is a completely different dynamic from the non-draft legal races that I was used to. This race, the Richmond Youth/Junior Elite cup, was part of a series of races across the country, where youths (13-15) and juniors (16-19) can qualify for the USA Youth and Junior Elite National Championships in West Chester, OH by placing top 15 in their respective age groups. Given my podium finishes at local races, I was fairly confident going into the race, but nothing could prepare me for the level of competition that I was about to encounter. Needless to say, I realized that I wasn’t nearly as good as I thought I was, placing a disappointing 56th place among 71 youth girls.

Soon after, I joined Endorphin Fitness, a local triathlon team with a focus on draft-legal racing. A year after joining Endorphin, I competed in the same race in Richmond, this time placing 13th and qualifying for nationals, where I went on to place 6th. Of course, this progress didn’t just happen overnight, and countless hours of training had to be put in – much more than I ever thought I would spend on a sport that I had previously only done for fun.

To this day, one of my favorite races is the Reston Sprint Triathlon. Before I was old enough to compete, I remember waking up early and going with my dad to Lake Newport to cheer him and others on while they raced. I eagerly counted down the years until I could finally participate in this race. I love the Reston Sprint Triathlon because it is a well-organized and fun local race, which also serves as a fundraiser for local charities. My favorite thing about this race is competing with my dad and many other local friends, while biking and running past my neighborhood. I also love the enthusiasm of the many volunteers, who always give me an extra surge of energy while I am racing.

I have come a long way since the days of putting on a shirt with my number on it and drying my feet with a towel before putting on my shoes. Now, triathlon (along with school) is an integral aspect of my life, but I wouldn’t trade it for anything. I train seven days a week, usually with two workouts a day. Sometimes I wonder why I’m doing this – especially after a bad race – but I make sure to look back at that very first race and remind myself of the joy and fulfillment that triathlon brings me.

No feeling can compare to that of crossing the finish line after countless hours of blood, sweat, and tears, no matter the outcome of the race. Triathlon makes me feel confident and proud. It has taught me the importance of hard work, dedication, and holding myself accountable in the pursuit of a goal. I have realized that I am capable of so much more than I think possible, and I’ve learned not to let my mind hinder my physical capabilities.

I firmly believe that everyone should have the opportunity to experience that “finish line feeling” and the satisfaction of achieving a goal that they have worked for. I want to give back to the community that has fostered and supported my love for the sport by helping other youth realize the joy that triathlon can bring, which is why I am so eager to begin working with CORE Foundation and help making triathlon more accessible to young children.

My name is Zoe Van Winckel. I am a junior at Thomas Jefferson High School for Science and Technology. For as long as I can remember, I have been doing things outdoors (camping, hiking, skiing, traveling, …). Asides from triathlon and school, I love exploring new places, spending time with friends and family, and snowboarding. You can probably find me running in Lake Fairfax, biking with my dad in Loudoun County, or at home studying.

CORE Foundation thanks Zoe for sharing her inspirational message and for giving back to her community through triathlon. Sign up here to join the CORE Foundation mailing list for periodic updates about our events and volunteer opportunities.

At CORE Foundation we help social entrepreneurs and small organizations achieve their goals. We provide counsel and resources to help individuals and organizations plan, build, and execute their visions.

Your ticket for the: Why Tri?