BROTHERS BY THE WAYSIDE Day of Service Event 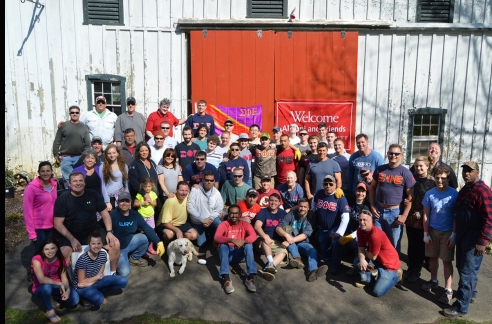 Radford University Sig Ep Brothers by the Wayside is an organization that supports those in need. We have an annual Day of Service Event and a wonderful reflection of our event last year  and its impact on the receiving family was written on our Redford University Alumni Magazine that I like to share.  Below is an excerpt:

On Arpil 2, 2016, Radford University Sigma Phi Epsilon alumni and current brothers converged on the Signorello farm in Leesburg to participate in a day of service in memory of John Signorello ’89.

“Only one guy from the current Sigma Phi Epsilon chapter at Radford University knew John, but that doesn’t matter. He was a brother,” said Devin Jones, current president of Sigma Phi Epsilon. Four years ago, Signorello passed away from a heart attack

In 2009, Signorello and his wife Carolyn purchased 280 acres of land for which they shared a vision. The couple saw it as their little slice of heaven and were excited for the opportunity to make it their own. Today, John’s four children, who share his passion for lacrosse, often play the sport in a small field on the family’s farm.

“It was always their dream to establish this beautiful farm where he could run lacrosse camps and grow his family,” said Scott Arthur ’91. “The unfortunate thing was that he passed before he could really see it come to life.”

The overall goal of the 2016 day of service was to address some of the immediate needs on the farm. “We basically had Carolyn make a ‘honey do’ list. A bunch of us came out and looked around to figure out what was possible to get done in a day,” said Arthur.

“We look out for our own,” said Arthur.

The commitment, love and brotherhood on the Signorello farm that Saturday was unforgettable.

Our Day of Service event is coming up again in April 2017.

Your ticket for the: BROTHERS BY THE WAYSIDE Day of Service Event

BROTHERS BY THE WAYSIDE Day of Service Event