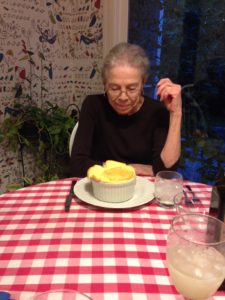 I have always enjoyed running: whether it was on a soccer field, cross-country trails, or a track. In high school, I created a list of lifetime goals. One item on that list was to compete in a triathlon. Several years later, I signed up for my first triathlon. I enjoyed it so much, I made it my goal to compete in at least one triathlon a year.

Shortly after learning that the Reston Triathlon was supporting the aforementioned foundations, I learned that my grandma was diagnosed with bone cancer and would be receiving palliative care.  It was a shock to my family.  She is an incredible woman and one of the most intelligent people I have ever known. She grew up in Panama, and fondly remembers climbing up the mango tree in her backyard to read after school every day. Her love for reading never ceased. It is not uncommon for my grandma to finish a 1,000-page book in a single day. Her community library ran out of books for her to read, because she read them so quickly! In addition to being a skilled reader, her crossword skills could put even the best to shame. Some of the most challenging American crosswords were ‘too easy’ for her, so she enthusiastically began doing the British crossword puzzles instead.

More impressively, my grandma was the only female in her class to graduate with an architectural engineering degree at Louisiana State University. After graduation, she combined her passion for reading and architecture and became the Editor for a well-known architectural magazine, The Architectural Record.

It is very difficult to see someone you love confined to a hospital bed, hooked up to an oxygen tank. While I cannot begin to comprehend the pain my grandma was in, I can relate to the pain family members feel for their loved ones who are suffering from cancer. By doing what I love, for those I love, I am inspired to help others who are suffering from cancer and support their loved ones by raising money for the Barnett-Searing National Cancer Foundation.

Your ticket for the: Pennies for Peg