Triathlon for a cause 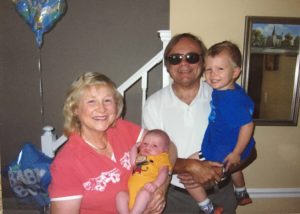 Our family has always been active. Dave (dad) likes to run; Heather (mom) is a Jazzercise instructor; and both boys, Zach (10), and Shawn (7) have been on the swim team since they were 6, biking since they were 4, and have been running since they were born! It only makes sense that the boys should do triathlons. This year will be Zach’s 4th Amyazing triathlon and Shawn’s first. Shawn completed his first triathlon in Herndon, Virginia in late 2017.

When we found out that the Amyazing triathlon was allowing participants to fundraise this year, the whole family was excited. Dave, a professional fundraiser for the Conquer Cancer Foundation, lost his father, the boys’ grandfather, to a brain tumor in 2012. As a family, we want to take every opportunity to raise money that will help families dealing with this terrible disease and allow scientists to find a cure.

Grandpa Glenn Wiemer was Superman. It wasn’t just a nickname – he fully embodied the characteristics of a superhero. Glenn was diagnosed with juvenile diabetes when he was 9 years old, in 1961. Despite this, he was active in sports, including baseball, hockey, and golf, and worked hard in school. Glenn graduated from Northwestern University with a bachelor’s and a master’s degree in education and started teaching at Washburne Middle School in 1974. In 1990, Glenn lost his vision completely due to complications from diabetes. Even though he was blind, Glenn continued to teach until 2009 with the assistance of a classroom aide. Throughout his career as a teacher he was a leader for students and colleagues alike and is always remembered for his sense of humor, intelligence, and love of music.

Zach and Shawn are honored to be completing the Amyazing triathlon in honor of both Amy Boyle, for whom the triathlon was created, and their superhero grandpa, Glenn Wiemer.

CORE Foundation and Be AMYazing! Reston Youth Triathlon would like to thank the Wiemer family for sharing their story. If you would like to help Zach and Shawn meet their fundraising goals, please tap here. To read more about Grandpa Glenn Wiemer (aka Superman), please view this article from the Chicago Tribune. 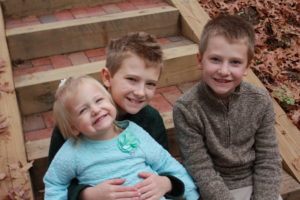 Your ticket for the: Triathlon for a cause

Triathlon for a cause